How much debt does the average student have?

What is a student loan?

A student loan is money that banks or the federal government lend to students or parents to pay for higher education. Student loans can be used to pay tuition, fees and room and board, and they can also be used for living expenses and books. Student debt refers to the total amount of outstanding student loans from students, graduates, and dropouts.

The majority of students — more than 70 percent of all bachelor’s degree recipients — now borrow money to pay for college, a higher proportion than ever. Those students owe $29,400 on average at graduation. Student debt drew public attention and concern as the recession hit and graduates fell behind on their loans. There’s now a growing consensus among economists that student debt is a drag on the economy, too, because indebted graduates and dropouts have less money to spend on other things.

How much student debt is out there?

The Consumer Financial Protection Bureau, a federal agency, estimated in May that total student debt is nearly $1.2 trillion, and that federal student loans alone make up more than $1 trillion in outstanding debt. (Private loans make up the remaining $165 billion.)

But actual debt from paying for college is probably higher. Some students or parents use credit cards, loans from retirement plans, or home equity lines of credit to pay tuition, fees, and living expenses. Those financial products aren’t included in the $1.2 trillion estimate. 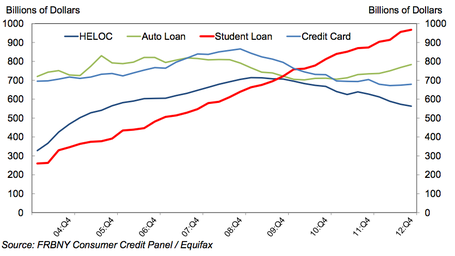